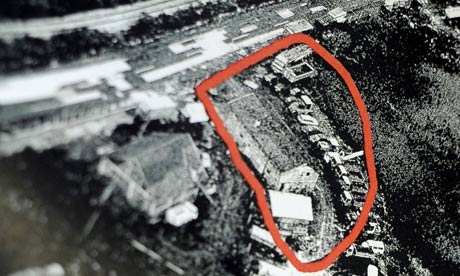 An aerial photo of the site of a mass grave in Serbia believed to contain the bodies of 250 ethnic Albanians. Photograph: Andrej Isakovic/AFP/Getty Images

The Serbian government today confirmed the discovery of a mass grave containing 250 bodies, believed to be ethnic Albanian victims of atrocities in Kosovo during Slobodan Milosevic's reign.

Serbia's war crimes prosecutor, Vladimir Vukcevic, said the grave had been discovered in the village of Rudnica, a few miles from Kosovo's northern border. His deputy, Bruno Vekaric, added that the bodies were buried beneath a building and car park.

Dejan Anastasijevic, an investigative journalist on the Serbian weekly Vreme, said the site belonged to a state-owned road construction company and had been built on in 1999, soon after the Kosovo war.

"It should have aroused suspicions right away," he said. "Rudnica is a very remote place. Who would want to build a company building there?"

The Serbian authorities said that exhumations at the site would begin soon, in co-operation with Eulex, the EU mission aiming to bolster justice and law enforcement in Kosovo.

"According to witness testimonies, there are 250 bodies of Kosovo Albanians inside," Vukcevic said.

The Rudnica site is the sixth mass grave in Serbia containing victims of Milosevic's suppression of an ethnic Albanian separatist uprising in 1998 and 1999, at the cost of an estimated 10,000 lives. It led to Nato intervention, and ultimately to Kosovo's declaration of independence in 2008. That has been recognised by the west, but not by Serbia or Russia.

Serb forces conducted mass killings in ethnic Albanian villages in 1998 and 1999, burying most of the victims close to the site of the killing. But when it became clear that Nato would intervene, the Milosevic government ordered the bodies to be dug up and moved elsewhere in Serbia and Serb-controlled Bosnia.

The removal of the bodies led some western commentators to doubt the accounts of mass killing from ethnic Albanian refugees.

Anastasijevic said that the "sanitation" programme, involving the removal of thousands of bodies, was carried out by Serbia's special counter-terrorist unit, SAJ. Nearly a thousand bodies were found near an SAJ base in Batajnica, outside Belgrade. Rudnica represents the second biggest grave from that period, after Batajnica.

The UN and Eulex had searched Rudnica for graves over a number of years but had failed to find them. The Kosovo media had claimed that the international investigators had been sent to the wrong location and had said several months ago that the bodies were hidden under the Rudnica car park. Serbian and Albanian sources said that the bodies had been found as a result of a tip-off to Eulex officials.

"We have been working on this particular case for some time. We have provided information and intelligence relating to the possible site of a mass grave in the Raška region. But we are still waiting for confirmation if this site has indeed been located," a Eulex statement said today.