Talk about archeology findings and its relation to historical events.
Post Reply
2 posts • Page 1 of 1

ATHENS — Not long before the new Acropolis Museum opened last weekend, the writer Christopher Hitchens hailed in this newspaper what he called the death of an argument. 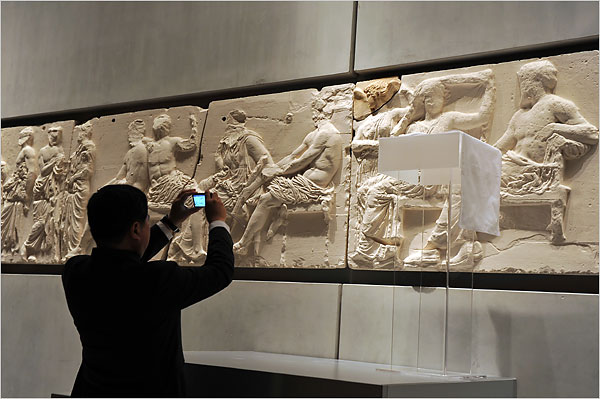 Britain used to say that Athens had no adequate place to put the Elgin Marbles, the more than half of the Parthenon frieze, metopes and pediments that Lord Elgin spirited off when he was ambassador to the Ottoman Empire two centuries ago. Since 1816 they have been prizes of the British Museum. Meanwhile, Greeks had to make do with the leftovers, housed in a ramshackle museum built in 1874.

So the new museum that Bernard Tschumi, the Swiss-born architect, has devised near the base of the Acropolis is a $200 million, 226,000-square-foot, state-of-the-art rebuttal to Britain’s argument.

From certain angles it has all the charm and discretion of the Port Authority terminal in Manhattan. Neighbors have been complaining all the way to the bank, housing values having shot up because of it.

Inside, however, it is light and airy, and the collection is a miracle. Weathered originals from the Parthenon frieze, the ones Elgin left behind, are combined with plaster casts of what’s in London to fill the sun-drenched top floor of the museum, angled to mirror the Parthenon, which gleams through wraparound windows. The clash between originals and copies makes a not-subtle pitch for the return of the marbles. Greece’s culture minister, Antonis Samaras, on the occasion of the opening last week, said what Greek officials have been saying for decades: that the Parthenon sculptures, broken up, are like a family portrait with “loved ones missing.” Mr. Samaras’s boss, Greece’s president, Karolos Papoulias, spoke less metaphorically: “It’s time to heal the wounds of the monument with the return of the marbles which belong to it.”

Don’t bet the British will agree.

Inside the museum visitors ascend as if up the slope of the Acropolis via a glass ramp that reveals, underfoot, ancient remains excavated during the building’s construction. (They will eventually be opened to the public.) It’s a nice touch. On the second floor archaic and early classical statues mill about a big gallery like a crowd in an agora, a curatorial and architectural whimsy that risks visitors missing works like the “Kritios Boy,” which nearly hides to one side.

As for the caryatids from the Erechtheion and the sculptural remains of the Temple of Athena Nike, including the sexy “Sandal Binder,” works of textbook import, they look a bit stranded on a balcony and in a passageway because the museum, save for the Parthenon floor, doesn’t have regular spaces. Free circulation puts everything on equal footing (this is the birthplace of democracy, after all), but the flip side of this layout is the failure to make priorities clear, which art museums exist to do.

That said, Athens needs new modern landmarks. The city is choked by slapdash buildings thrown up after the junta fell during the early 1970s. Public monuments ape ancient palaces, badly. Nikos Dimou, a prominent writer here, recalled that when a show of the British modern sculptor Henry Moore arrived years ago: “People complained about bringing monstrous forms to the land of beauty. Ninety percent of cultured Greeks even today live with this classical sensibility.”

A generation or two of well-traveled, environmentally conscious, globally wired Greeks has since come of age, and the Elgin Marbles debate now represents a kind of luxury that Greece has earned. It began with the actress Melina Mercouri during the 1980s, her publicity campaign coinciding with the rise of a populist leader, Andreas Papandreou, whose slogan was “Greece for the Greeks.” It has evolved into a less glamorous tangle of diplomatic and legal maneuverings, with Greece lately recovering some 25 antiquities from various countries, including some additional stray fragments from the Parthenon.

“This issue unifies us,” Dimitris Pandermalis, the Acropolis Museum’s director, said the other day, never mind that surveys show how few of them actually bother to visit the Acropolis past grade school.

As to whether Elgin had legal authority to remove the marbles, the Ottomans being the ruling power, as the British maintain, Mr. Pandermalis paused. “The problem is not legal,” he decided. “It’s ethical and cultural.” George Voulgarakis, a former culture minister, wasn’t so circumspect when asked the same question. He said, “It’s like saying the Nazis were justified in plundering priceless works of art during the Second World War.”

“I understand what museums fear,” Mr. Voulgarakis added. “They think everything will have to go back if the marbles do. But the Acropolis is special.”


That’s what the Greeks have insisted for years when arguing why the marbles belong to Greece, but they also say the marbles belong to the world when pointing out why they don’t belong to the British. The marbles in fact belonged to the Parthenon, a building here and nowhere else, the best argument for repatriation, except the idea now is not to reattach them where they came from but to move them from one museum to another, from the British Museum to the new Acropolis Museum, albeit next door — a different matter, if not to the Greeks.


“It’s the fault of a German,” Mr. Dimou said about Greek pride in this cause. He was referring to Johann Winckelmann, the 18th-century German art historian whose vision of an ancient Greece “populated by beautiful, tall, blond, wise people, representing perfection,” as Mr. Dimou put it, was in a sense imposed on the country to shape modern Greek identity.

“We used to speak Albanian and call ourselves Romans, but then Winckelmann, Goethe, Victor Hugo, Delacroix, they all told us, ‘No, you are Hellenes, direct descendants of Plato and Socrates,’ and that did it. If a small, poor nation has such a burden put on its shoulders, it will never recover.”

This myth required excavators on the Acropolis during the 19th century to erase Ottoman traces and purify the site as the crucible of classicism. The Erechtheion had been a harem, the Parthenon a mosque. “But Greek archaeology has always been a kind of fantasy,” Antonis Liakos, a leading Greek historian, noted the other day. The repatriation argument, relying on claims of historical integrity, itself distorts history.

For their part, the British also point out that the marbles’ presence in London across two centuries now has its own perch on history, having influenced neo-Classicism and Philhellenism around the globe. That’s true, and it’s not incidental that the best editions of ancient Greek texts are published by British, French, Americans and Germans, not Greeks. But imperialism isn’t an endearing argument.

So both sides, in different ways, stand on shaky ground. Ownership remains the main stumbling block. When Britain offered a three-month loan of the marbles to the Acropolis Museum last week on condition that Greece recognizes Britain’s ownership, Mr. Samaras swiftly countered that Britain could borrow any masterpiece it wished from Greece if it relinquished ownership of the Parthenon sculptures. But a loan was out.

Pity. Asked whether the two sides might ever negotiate a way to share the marbles, Mr. Samaras shook his head. “No Greek can sign up for that,” he said.

Elsewhere, museums have begun collaborating, pooling resources, bending old rules. The British Museum, the Metropolitan Museum of Art, the Louvre and other great public collectors of antiquity have good reason to fear a slippery slope if the marbles ever do go back, never mind what the Greeks say.

At the same time the Acropolis Museum plays straight to the heart, sailing past ownership issues into the foggy ether of a different kind of truth. It’s the nobler, easier route.

Looting antiquities obviously can’t be tolerated. Elgin operated centuries ago in a different climate. The whole conversation needs to be reframed. As Mr. Dimou asked, “If they were returned, would Greeks be wiser, better? Other objects of incredible importance are scattered around Greece and no one visits them.” Mr. Liakos put it another way: “It’s very Greek to ask the question. Who owns history? It’s part of our nationalist argument. The Acropolis is our trademark. But the energy spent on antiquity drains from modern creativity.”

The opportunity is there.

Re: Elgin Marble Argument in a New Light

“We used to speak Albanian and call ourselves Romans, but then Winckelmann, Goethe, Victor Hugo, Delacroix, they all told us, ‘No, you are Hellenes, direct descendants of Plato and Socrates,’ and that did it. If a small, poor nation has such a burden put on its shoulders, it will never recover.”

This is the reason why I have written numerous articles, and I still insist, Hellenism is an artificial ethnicity, it doesnt have to do with the real ethnic background of Greece population. It was exactly the western scholars and politicians who taught them how to present themselves, something that was gone or even something made up in western offices and school catedras.
The only thing necessary for the triumph of evil is for good men to do nothing
Top
Post Reply
2 posts • Page 1 of 1