CULTURAL AND ETHNIC LINKAGE BETWEEN SOUTHEAST ILLYRIA AND WESTERN MACEDONIA IN THE LIGHT OF PAINTED POTTERY
(Translated from Studime Historike, 1996, #1)

One of the main historical problems about Illyrians has been in defining their territorial borders. This problem is especially evident in regard to the eastern border, and an examination would warrant a focus on the ethnicity of peoples that inhabited the areas between Illyria and Thrace as well as between Illyria and Macedonia.This problem was presented in two symposiums devoted to the Illyrians which were organized in Yugoslavia, exclusively on the subject differentiating Illyrians from Thracians and on bases of archeological material, historical and linguistic arguments it is reasonable to maintain that the border should be extended further to the east. In this context, this study, by examining cultural and ethnic relations that had existed between southwest areas of our country and western Macedonia during the late part of the bronze age, will enhance the necessity of reconsidering the southeast extension of Illyrian inhabited territories.This study will not attempt to come up with conclusive answers to the problem it is considering because the material on which it is relying, as of now is still limited, but here it would be sufficient to present few observation and conclusions rising from a thorough analysis of discovered archeological material.

Many have observed the presence of a rich tradition of Epos among Albanians bordering Slavic neighbors to the north. These are a series of poems, known as Epos of Kreshniks, are set in an alpine background. Ismail Kadare summarizes this setting and the subject matter of this poetic cycle as: “ The isolated fortified houses, where the heroes spend the days and nights between their battles, the relations between brothers, brides, sister-in-laws, wedding attendants, three zana (mythological beings, usually in the form of young woman, with magical powers) who approach the night’s home at dusk to complain that someone had insulted them, the alarm fires that warn of approaching danger, the seeing out for war against the enemy, the marches, the fierce battles in the mountains, the lonely duels, after which the battle-scared land lies idle, the girls, wives sisters carried off, the vengeance taken, the cruel punishments for infidelity, the pursuits among the mountain peaks in magnificent winter scenery, the caravans of wedding attendants heading for hazardous weddings, the relatives paralyzed and turned into stone by the zanas due to the sins they have committed on the way, horses drunk on wine, nights treacherously blinded, on horses likewise blinded, wandering desolate through the mountain, cuckoos that warn of impending disaster, the sister who tries to trace the path of her wounded brother from the bloodstains, but in vain, because the rain washes it away, the secret places inhabited by mythological beings, their passions mingled with those of heroes, the springs that turn red from washing clothes of their sons who have returned from their marches, the deep dungeons, death, betrayal, forsaken graves scattered all over this forlorn place. The Cursed Mountains(Bjeshket e Nemuna) where the seven sons of Muji lie, the Barren Mauntains(Bjeshket e Thata) where Halili lies, the Desolate Mountains(Bjeshket e Shreta) where Muji, himself has been buried, their boredom lying deep in the frozen earth, the macabre challenge to the dead to a duel by a living soul who prowls around the grave with two-hundred dogs, the groans of the dead under the ground, who cannot rise to do battle with trhe enemy, the majestic lamentations and spine-chilling curses of cosmic proportions, in brief, a feverish action which goes on for hundreds of days, or perhaps, hundreds of years.”
As interest grew about this poetic tradition, it did not take long for the question of who took it from whom came into foreground. Being that the Albanian neighbors were much earlier motivated by their strategic nationalistic interests, they maintained that the Albanian highlanders just copied from their neighbors. But they could never explain the uniqueness of Albanian cycle, on which a predominant theme is their struggle against “Shkiet”(Slavs), in contrast to the Bosnian theme which has Muslim religious motives.
Some Albanian writers, on the other hand maintain the opposite view that if there was copying it had to be from Albanian to Serbo-Croatean, and was most probably done by bilingual Albanian singers serving in “Chetas” in Bosnia most probably during the mid-1700’s. Veis Sejko recently published book, The common elements characterizing Albanian and Serbo-Croaian epics, has given strength to this view.
Seiko can be considered at lease as authoritative as most of the authors that were listed in the articles by ML as having contributed to the discussion on the subject. He knew Serbo-Croatian language an culture well and appears to have been interested on the subject for a long time.
In his book he lists the following points in support of the Albanian origin of the Epos:

-The Albanian song has in Lika the place name of Kotorret e reja, while Boshnjak or Croatian one do not, meaning that the Albanian singer was himself in Lika.
-The Croatian poet Andrea Kaciq Mioshiq sings for indeqinous Albanian units Croats in Bosnia; most probably these units also had had their own singers.
-Serbo-Croatian studies accept that Boshnjak songs originated in the 17th century in Lika, and from there came to Bosnia, and corresponds withg the existence of Ceta of Muji and Halili there*, meaning that the Boshnjak song was created under the influence of Albanian epic song.
-The most enthusiastic s/c authors could only rationalize the spread of Boshnjak to Albania by attributing it to “boza’ and “hallva’ makers or soldiers; it is doubtful if the letter were in Bosnia, but even if they had been they had to have been from Albanian cities where no Kreshnik epic existed. With no other facts, the claim has to be considered naïve.
-The fact the Albanian cycle is cultivated in villages, and not in any village, but in Malsia, means that it had always a specific purpose, as is revealed to be the resistance against foreign occupiers.
-The fact that the Boshnjak epic is pro-Sultan and is devoted to Islam, where as the Albanian epic songs of Malsi are predominantly against Sultan points to a basic difference between the two epic song traditions.
-The fact that the Albanian epic song is motivated against kraals of Midieval Serbia some hundred years earlier than the Boshnjak epic, in reality points to the Albanian song being some hundred years older than the Boshnjak epic.
-The fact that Albanian language words are traced in Boshnjak and Croat epic songs, means that the seed of the latter come from Albanian singers, who still sing songs(at least up to the 1950’s) from the Boshnjak cycle in the Valley of Novi Pazar.
-The fact the Boshnjak epic song has an Albanian protagonist named Arnaut Osmani who is a nephew of Mui affirms that Bosnian Mui is also Albanian.
-The fact that the Serbo-Croatians have in their epic many songs, legends, ballads and motives which are common with the Arbresh of Italy, a proof that these elements are cultivated in the Albanian popular poetry before 15th century, at a time during which popular poetry was not known by the S/C.
-The fact that in the Albanian song the antagonists are ‘krals and shkie’, excludes any possibility of borrowing between the two traditions, other than possibly the older epic tradition serving as a model and creative wealth. Mr. Sejko analizes in detail the epic tradition of Albanians as well as that of their northern neighbors and on the bases of this he reaches broad conclusions in support of his theory. What is most interesting is his analysis is the song metrics in both languages and and elements in Bosnian cycle identified as Albanian. He is very critical of Albanian authors, who posses insufficient knowledge of the subject and at the same time come out in support of Serbian conclusions concerning the origin of the Epos of Kreshniks. Mr. Sejko theorizes that Ceta of Muji and Halili mentioned in the Bosnian cycle, after concluding that it was made-up of Albanians, was not military, but made of individuals from Malsia who due to economic and Turkish pressure had to move around to gain their livelihood. 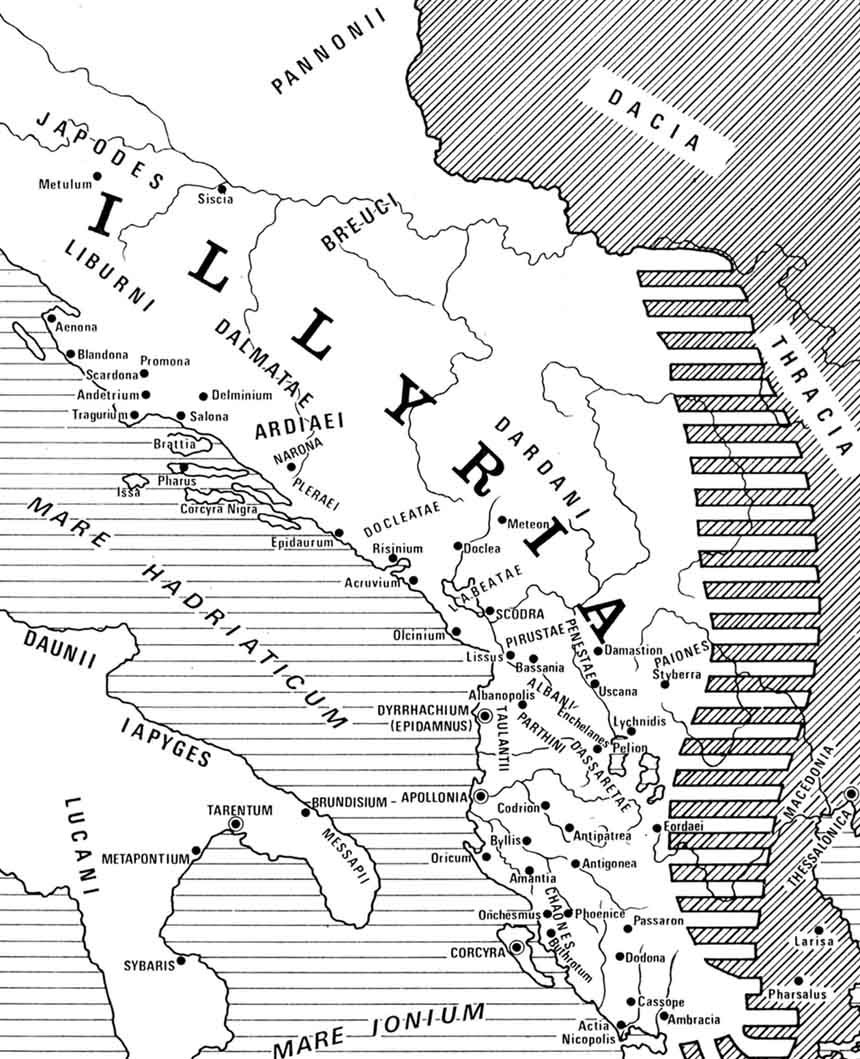 
The Albanians, who had often been friendly with the Montenegrins, became their most resolute foes, and this savage enmity has existed till the present day (1), and is still the most serious obstacle to Montenegrin advance in Albania.

(1) Even the Catholic tribes, as the Mirdites, of Albania have usually been hostile to the Montenegrins.