Since we are talking about Italy the following photo is made from an Illyrian artifact, found in Sardegna Italy: 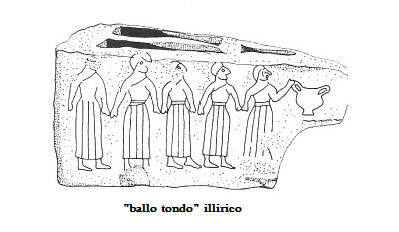 I think the people in the picture are males wearing fustanella.
The only thing necessary for the triumph of evil is for good men to do nothing
Top Thank you Zeus10 about above proofs about incontestable Albanian origin of Fustanella. What I consider as important to add here is that Fustanella is wore by Albanians not just in southern Albanian lands, but also in Northern Albanians lands such as Kosova, Sandjzak (Tregu i Ri), Montenegro, etc, etc. My ancestors in my native village in Zotaj (Ferizaj region) wore such Fustanella. My grand-fadher said to me that they wore Fustanella in special occasion (for example in festivals, etc).
Moreover, the powerful -Pasha- of Shkodra Pashallak had wore the same fustanella!

http://www.shkoder.net/images/shkodra/k ... hatliu.jpg
You do not have the required permissions to view the files attached to this post.
Ne sot po hedhim faren me emrin Bashkim,
Qe neser te korrim frutin me emrin Bashkim!
Top

The fustanella, or white kilt, of the traditional Albanian is as common in the
streets of Athens as the private soldier's uniform in London
(The classic and the beautiful from the literature of three thousand years‎ - Page 395
by Henry Coppée - Juvenile Nonfiction - 1895 page 395)

"the Albanian fustanella, which was adopted by the Greeks
after their liberation in 1821 as their national costume.."

'The duel of roosters' by P.Jovanovic
You do not have the required permissions to view the files attached to this post.
Ne sot po hedhim faren me emrin Bashkim,
Qe neser te korrim frutin me emrin Bashkim!
Top

'Sword Dancing' by Pajo Jovanovic
You do not have the required permissions to view the files attached to this post.
Ne sot po hedhim faren me emrin Bashkim,
Qe neser te korrim frutin me emrin Bashkim!
Top

The Greek King Otto
Wearing garments that are Influenced from Albanians.
By Niko Lyrtas (oil painting)
Hangs in the Greek International bank Lobby in Athens.
You do not have the required permissions to view the files attached to this post.
Ne sot po hedhim faren me emrin Bashkim,
Qe neser te korrim frutin me emrin Bashkim!
Top

Famous Albanian Fustanella
The famous Albanian kilt (or fustanella as it is known in the Albanian language) was common dress for men in the 13th century where it was regularly worn by a tribe of the Dalmatians, one of the Illyrian progenitors of the Albanians. At that time, the kilt was called Dalmatica, however, theories exist that the kilt really had its origin during much earlier times as a long shirt called linja which, when gathered at the waist by a sash, gave the appearance of a knee- or calf-length kilt. Depending on the social status of the wearer, materials used in fabricating the fustanella (thereby defining the number of pleats) ranged fromcoarse linen or woolen cloth for villagers to luxurious silks for the more affluent. Although the kilt was once worn by men throughout Albania, today it is seen only on special occasions in southern Albania, especially in the Gjirokaster area, and in the Albanian regions of Montenegro, Kosova, Serbia, Macedonia, and Greece.

The Hungarian sociologist, Baron Nopcsa, believed that the Albanian, or Illyrian, kilt became the original pattern for the Roman military dress, and, because of its similarity to the Celtic kilt, he also theorized that the Roman legions in Britain, through the presence of its Illyrian element, probably started the fashion among the Celts (it may also be interesting to note that the Celtic word for Scotland is Alban).

Lord Byron, in Childe Harolds Pilgrimage, observed the ...Albanian kirtled to the knee, and T.S. Finlay in his Travels through Greece and Albania states, unequivocally, that It was the fame of the Albanians which induced the modern Greeks to adopt the Albanian kilt as their national costume.
See The Albanians and Their Territories, Pages 164-166, 8 Nentori Publishing House, Tirana, 1985, and Faik Konitzas Albania: Rock Garden of Southeastern Europe , Pages 81-90
From at least the 14th century, a strong cotton cloth called fustan was produced - hence the name of the garment fustan and later the diminutive fustanella. But archeological evidence points to the fustanella as being a more ancient form of clothing. Among the more important (archeological) finds are 1. a small ceramic statue from the 4th century C.E.(AD) found in Durres which depicts a man wearing a long fustanella fastened with two bands across the chest; 2. a gravestone from the 3rd to 4th century C.E.(AD) found in Smokthine, near Vlora, which shows a man dressed in a fustanella; and 3. a much more ancient figurine found in Maribor, Slovenia, which dates from the 5th century B.C.E. (BC) which also shows a fustanella worn with the two bands across the chest.
Ne sot po hedhim faren me emrin Bashkim,
Qe neser te korrim frutin me emrin Bashkim!
Top

Lord Byron:
The Arnauts, or Albanese, struck me forcibly by their resemblance to the Highlanders of Scotland, in dress, figure and manner of living. The kilt, though white; the spare, active form; their dialect, Celtic in sound, and their habits, all carried me back to Motven. No nation are so detested and dreaded by their neigbours as the Albanese; the Greeks hardly regard them as Chrystians, or the Turkd as moslems; and in fact they are a mixture of both, and sometimes neither. Their habits are predatory; all are armed; and the red-shawled Arnauts, the Montenegrins, Chimariots and Gedges are treacherous; the others differ somewhat in garb, and essentially in character.

Memoir of a Campaign with the Ottoman Army in Egypt, from February to July 1800:

The troops which are raised in the Morea, Epirus, Albania, and Macedonia are known under the general apellation of Arnauts. They are warlike people.They retain much of the ferocity of the Spartans, of whom they are said to be the descendants: their dress would favour that supposition, from its resemblance to the the tunic. They wear a breastplate of silver and a species of armour covers their legs; many of them walk in sandals; the fore part of the head, as far as the middle of the crown is shaved, and only a tuft of hair hangs loose on the back part of the head; a red sjull-cap of cloth comes far over their eyebrows, and gives them a fierce look. Their fire-arms are in general beautifully ornamented in silver and gold. The Arnauts have the reputation of being very courageous; they certainly carry with them a very exalted notion of their own prowess; and, as they are commanded by officers from their nation whom they respect.

(He call Albania only the territory of Alpes mountain which I think the name Albanian come from and later got used for all of us. Arbani (Arberesh was the way we called ourself) Arvanites and Arnauts are just the derivates of that name.
Ne sot po hedhim faren me emrin Bashkim,
Qe neser te korrim frutin me emrin Bashkim!
Top

"...the foustanella, the famous Greek kilt, is said by many to be a version of
the Albanian warrior's costume, and is sometimes called the Albanian kilt...
~Dinner with Persephone‎~Patricia Storace 1996 - Page 164

Even the foustanella, the Greek national costume, is Albanian
~Eurydice Street: a place in Athens‎~by Sofka Zinovieff 2004 - Page 190